Erik ten Hag secured his hundredth victory as Ajax's trainer on Sunday against Feyenoord. We look back on this beautiful milestone with the help of the video above and some statistics down under.

By beating Feyenoord, Ten Hag completed a beautiful circle. His first victory and his hundredth both came against the side from Rotterdam.

Logically, the majority of Ten Hag's victories have come in the Eredivisie, where he has won 71 matches. Perhaps most notably, Ten Hag has recorded eighteen victories in European competitions. Ten of these took place in the the UEFA Champions League. 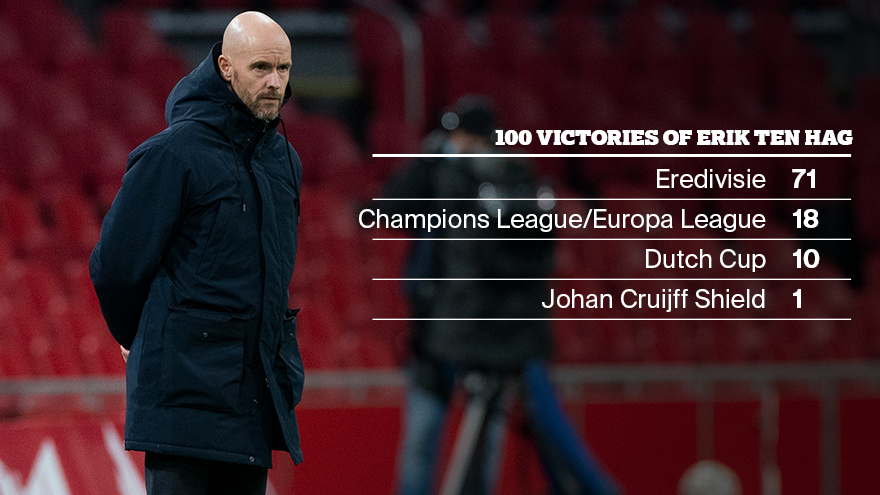 And that's historically quite impressive. Only Louis van Gaal won more often with Ajax in the prestigious tournament. In the mid-nineties, he racked up twenty victories in the Champions League. Frank de Boer follows Ten Hag in the list with seven victories on Europe's biggest stage.

Sunday afternoon saw a hard-fought home win for Ajax in their Klassieker match against Feyenoord. Feyenoord were beaten 1-0 at the Johan Cruijff ArenA by a goal from Ryan Gravenberch halfway through the first half.

It was a match of two extremes. Ajax were very dominant in the first thirty minutes, where they took the lead thanks to the boot of Ryan Gravenberch. In the second half Ajax really had to dig deep, but Erik ten Hag's held on right down to the wire., out of which came a hard-fought win over Feyenoord.

Fourteen questions and dilemmas for Mo Kudus. Does he want to win the Champions League with Ajax or become World Champion with Ghana?