As of this Thursday, Andre Onana will begin training with the Ajax first team again. The goalkeeper was allowed to resume his training activities at Ajax from the beginning of September, but he has been training with Ajax U23 since that time.

On February 5 of this year, the disciplinary body of the European football association (UEFA) suspended Onana for 12 months for a doping violation. After an 'out of competition' check on October 30, 2020, the substance Furosemide was found in his urine.

CAS
On appeal, the international sports tribunal CAS ruled on May 10 of this year that the suspension would be shortened to nine months. The suspension will therefore end, definitively, on November 4, after which he is also eligible to play for Ajax again. In accordance with standard practice and as expressed in the ruling of the CAS, Onana was allowed to resume his training activities at Ajax two months prior to that date. 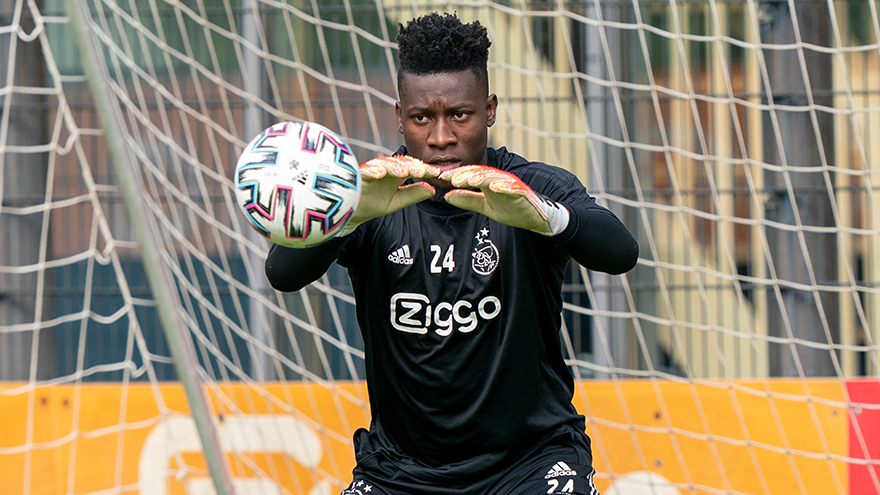 Marc Overmars: "It was clear to us that Andre would make a transfer last summer. That did not happen and so he is still under contract with us. My position on his situation was clear, but then the news came that Maarten Stekelenburg is out for the rest of the season. Ajax needs are paramount and from this point of view it is good that he reports to the first team again."

'With full dedication'
Erik ten Hag: "Nobody is happy with the situation created by the suspension. But we shouldn't be naive either. Andre is a fantastic keeper who has meant a lot to Ajax and he is fit. From the beginning of September he can train at Ajax again and he does that every day with full dedication. It is important for Ajax that we have a deep and good selection at our disposal, there is room for Andre in that. So as of today, he will report back to the first team on the training field."

By the number | Milestone for Onana and Klaassen

Andre Onana and Davy Klaassen have reached a special milestone. They played against FC Twente, marking their 200th game for Ajax 1. An overview.

Maarten Stekelenburg will no longer be able to feature for Ajax this season. The goalkeeper has been sidelined for some time with an injury and now an operation will be required in order to achieve a full recovery.