From Zeeburgia to the 100 Club at Ajax before his twentieth birthday. It's Ryan Gravenberch's career in a nutshell. The Ajax midfielder played his hundredth game in red and white against Sparta on Saturday - a beautiful milestone before he will blow out twenty candles on May 16.

The young Gravenberch was only eight years old when he walked around the Toekomst for the first time in 2010 in an Ajax uniform. He followed the footsteps of his older brother Danzell, who had joined the youth academy in Amsterdam in 2002.

The little Amsterdammer joined the Ajax U8s, with Kenneth Taylor and Brian Brobbey as teammates. The youth academy went well for Gravenberch. He regularly skipped age levels to move up to older teams. In 2018, the sixteen-year-old hit a number of important milestones.

At the end of the 2017/2018 season, the talented Gravenberch received the Abdelhak Nouri trophy as the greatest talent at the Toekomst. Gravenberch signed his first contract in May 2018: on his sixteenth birthday, committing himself to Ajax for three seasons.

His debut for the first team came soon after. In an away match against PSV, he entered the field for David Neres in the 83rd minute, trailing 3-0, making him the youngest Ajax debutant of all time. 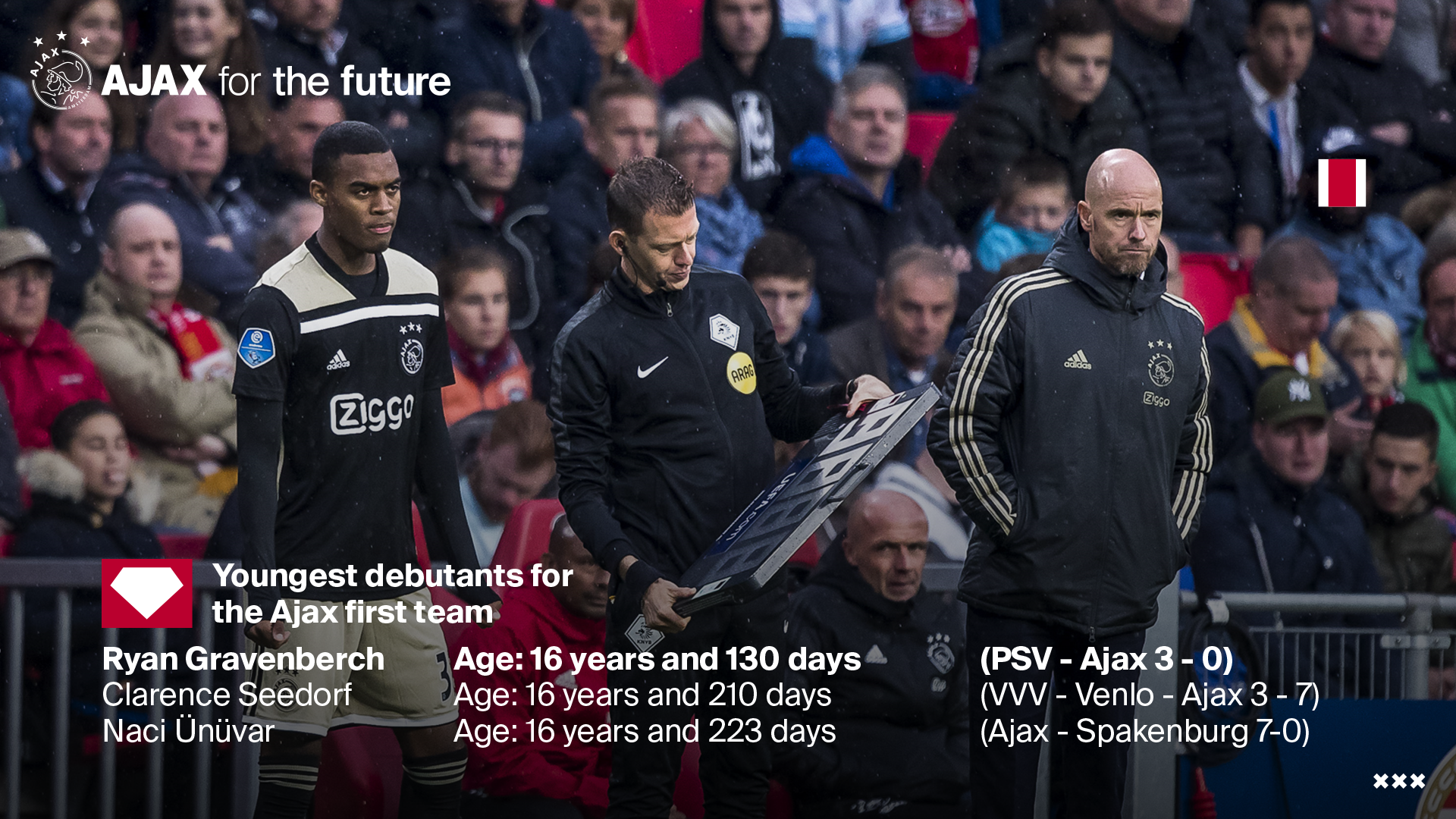 Gravenberch scored his first goal three days later in the KNVB Cup against amateur side HVV Te Werve. He made his debut as a starter and scored the goal to make it 0-7. In doing so, Gravenberch broke Clarence Seedorf’s record. He was 16 years and 133 days old when he scored his first goal for the first team, while his predecessor was 16 years and 361 days  old when Seedorf scored for Ajax against Vitesse in 1993.

Breakthrough
His true breakthrough came a year later. Three days before Christmas, in 2019, the then 17-year-old midfielder kicked off a match at the Johan Cruijff ArenA. ADO Den Haag were the opponents. Ajax had no trouble with the visitors on that day. The match finished 6-1 with Gravenberch scoring the goal that made it 4-0.

In that season, the athletic midfielder also played his first minutes for Ajax in European football against Getafe. He would only feature for seventy-five minutes though, as Ajax were eliminated by the Spanish opponent over two matches. Due to the coronavirus, that season was cut short and Gravenberch was forced to wait for his second league title and Dutch Cup. 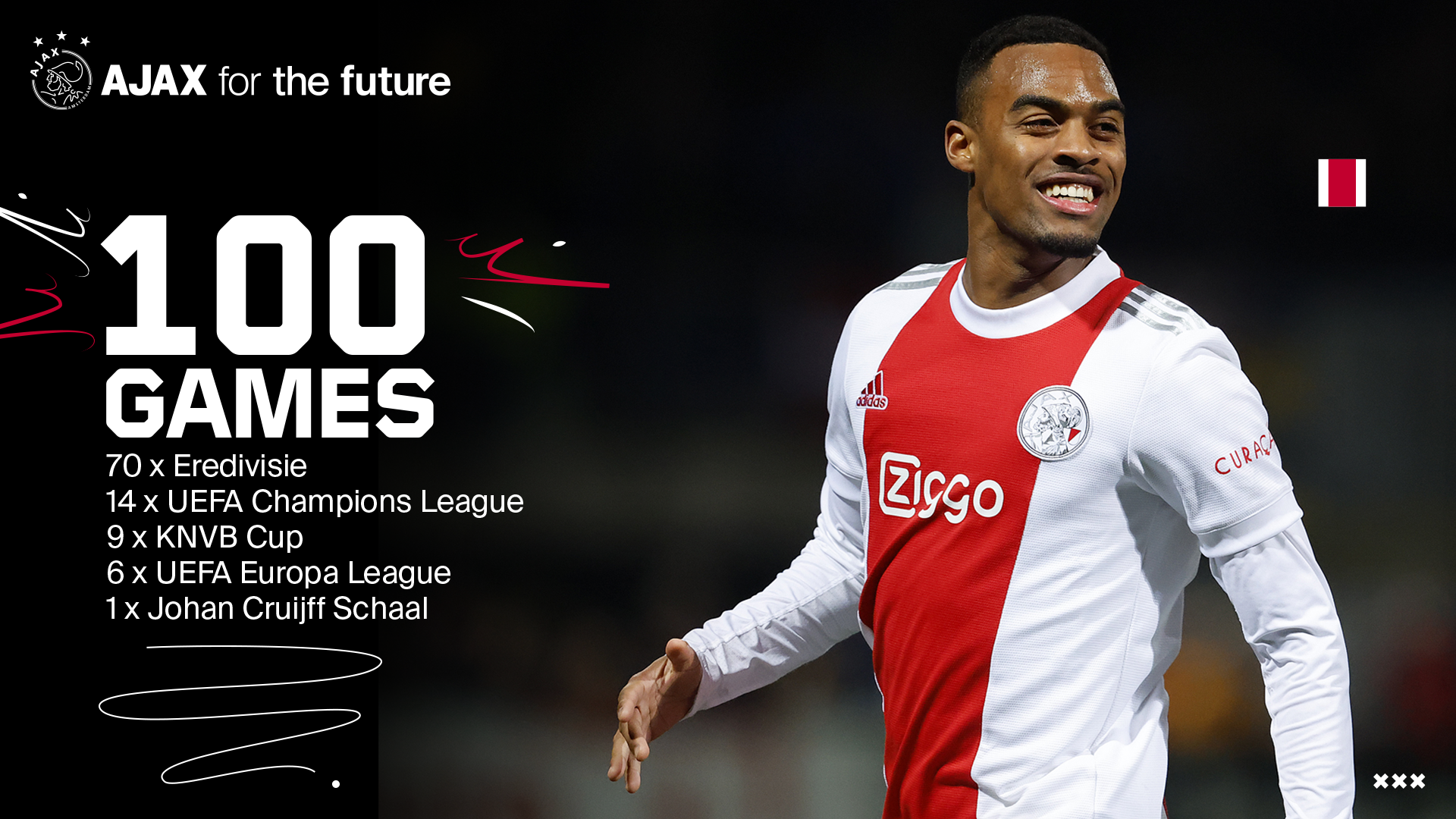 A year later, he gets both of them. By that point Gravenberch had established himself as regular in the starting eleven, extended his contract through 2024, and made his debut in the UEFA Champions League. He had his own moment in the spotlight in the home game against FC Midtjylland on November 25, 2020, scoring a beautiful goal from outside the box. Ultimately, that goal was also voted Ajax’s best goal of the year.

Gravenberch began racking up appearances in rapid succession. He made his debut for the national team in March 2021. Two months later, he was chosen as Talent of the Year by Ajax's technical staff. He and Ajax went on to claim the double that season. 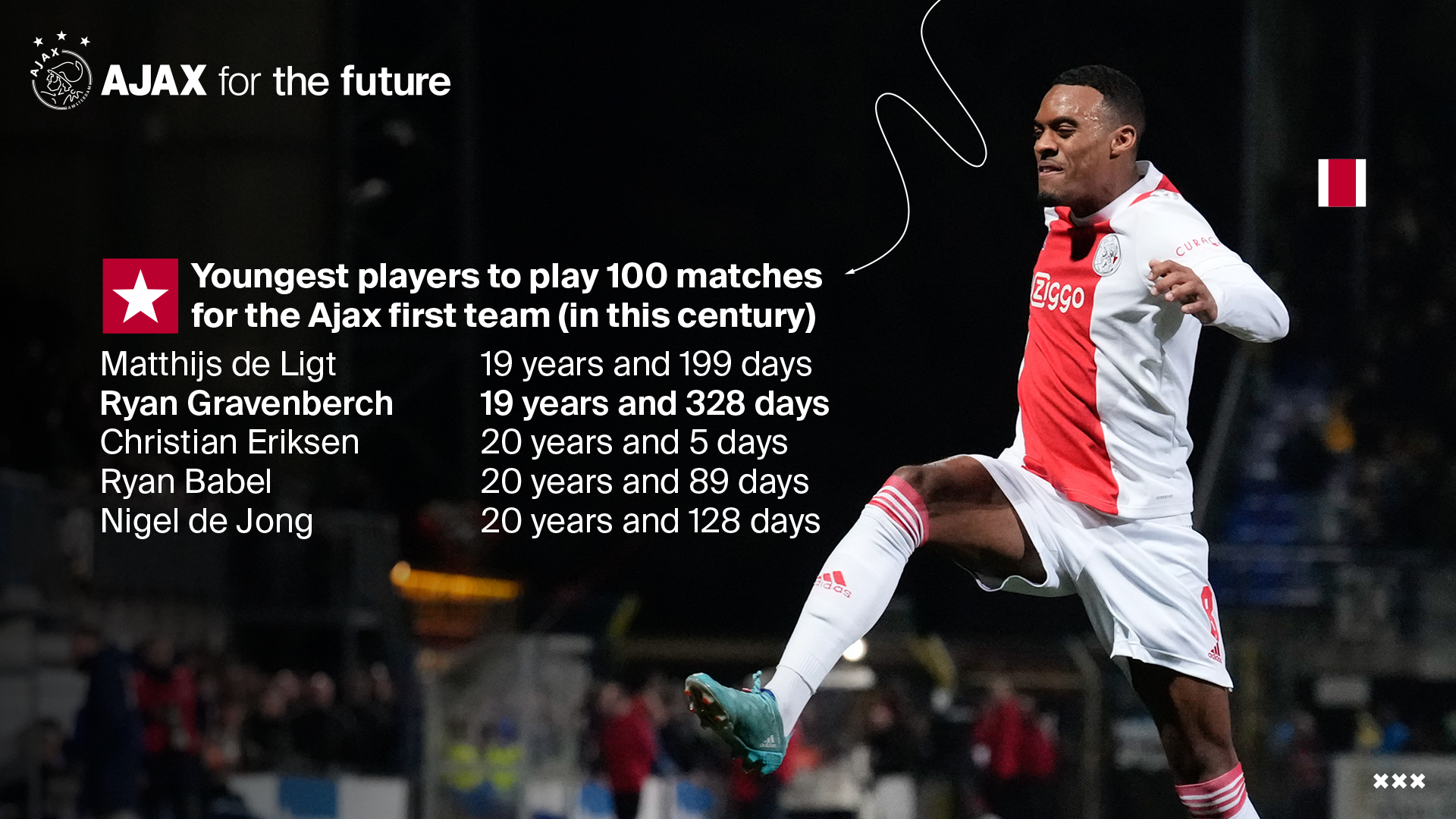 As he continues to play more and more games for Ajax, the match against Sparta marks a significant milestone. Gravenberch played for the hundredth time for the Ajax first team. This makes him the second youngest Ajax player after Matthijs de Ligt to reach the 100 Club this century.

Ajax claimed all three points from the home match against Sparta. The gap to second-placed PSV is still four points after this weekend in the Eredivisie. The match was preceded by a statement of support for Louis van Gaal. The 70-year-old trainer is suffering from prostate cancer and has a history with both clubs.

On Saturday evening Ajax achieved a closely contested win at home against Sparta Rotterdam. The Ajax team were behind after half an hour of play, but showed their resilience early on in the second half. Thanks to goals from Davy Klaassen and Dusan Tadic the Amsterdam team repaired the damage to end up 2-1.

Klaassen: 'Ultimately points are the most important thing'

Trainer Erik ten Hag was satisfied with the win against Sparta (2-1), but thought that his team were too impatient in the first half. "We made it really difficult for ourselves. We were too keen and really impatient. Then you are forced to play catch up. We were in too much of a hurry and wanted to get to the final phase too quickly. That way you play to Sparta's advantage."