Former Ajax midfielder Christian Eriksen is training with Jong Ajax this week. The Danish international is working to keep his fitness levels until he finds a new club.

The Dane was given the green light by his doctors in December to resume his football career after completing months of individual recovery.

Because he wears an ICD, inserted after he suffered a cardiac arrest during the European Championship match between Denmark and Finland, he had to cancel his contract with Inter. Professional athletes are not allowed to play with an ICD in Italy – the only country in the world with such a rule.

Until that happens, Eriksen will be allowed to train with Jong Ajax at the Toekomst. "I am very happy to be here. At Ajax I know the people, it feels like coming home because I was here for so long. All facilities are available here and with Jong Ajax I can train at a high level in a group. That's the perfect foundation for me at the moment. I want to be at my best again as soon as possible so that when I find a new club, I can perform well there as quickly as possible." 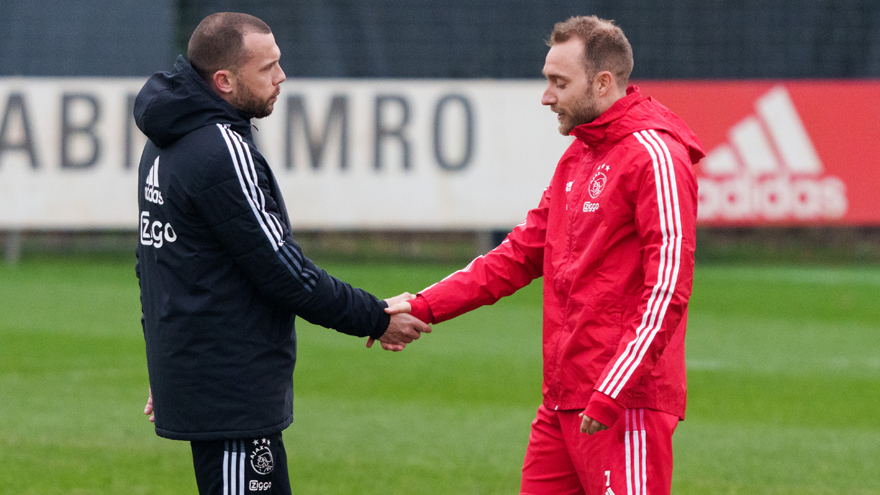 As a trainer of Jong Ajax, John Heitinga sees what the 29-year-old’s presence during training does for his players. "If a former player and, moreover, a self-trained product of ours knocks on the door of the club in this situation, we have no doubts, of course he’s welcome back. It's great that he can train with us. Christian is a footballer who is an example for many of our boys, a source of inspiration for the youth to move up."

The everlasting Danish Ajax Romance: 'Had the most fun playing in Amsterdam’

Ajax's Danish players hold a prominent place in the club's history. There are plenty of examples of players from the Scandinavian country who found success in Amsterdam. More than enough reason for us to make a special Danish episode of the Ajax Podcast in the run up to the team's UEFA Champions League game with FC Midtjylland.

Ajax Podcast | Heitinga and De Zeeuw on life after football

How, as a professional footballer, do you pick things back up after you retire? What kind of mindset is necessary to be successful after football? Coach John Heitinga, entrepreneur Demy de Zeeuw, and co-host Eyong Enoh discuss these topics in the newest episode of the Ajax podcast with David the Host.

Thanks to a 1-2 win against PSV, Ajax have regained the top spot in the Eredivisie. The decisive goal came from the left foot of Noussair Mazraoui. Brian Brobbey had already given Ajax the lead in the first half. Enjoy the highlights from the win in Eindhoven.