Steven Berghuis had two reasons to celebrate on Sunday - his thirtieth birthday and Ajax’s 0-2 win against Feyenoord. This was his first time returning to the Kuip as an Ajax player. The Ajax bus was met with a lot of fireworks. ''I am grateful to Ajax, Feyenoord and the police for how they arranged the arrival. It was exciting for a bit, but you also have to be mature about that.''

Due to the corona measures, the Klassieker was played without supporters. Although Berghuis would have likely been met with a less-than-kind welcome, he would rather have had a full stadium. 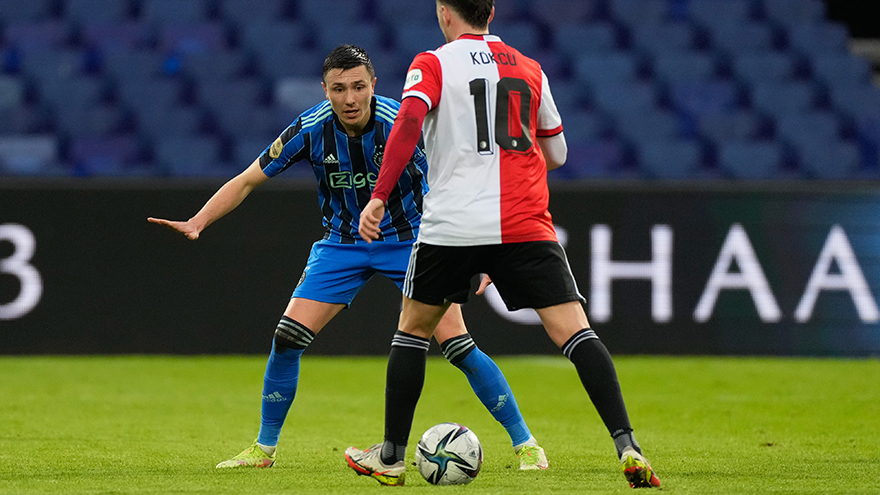 30-year-old Berghuis saw his team struggle with the opponents in the Kuip. ''It was not a good Klassieker. I thought we were very sloppy, especially in the second half. But when we scored the 0-2, the game was finished.''

A little drink
The match was very intense. The fact that the match was a bit sloppy was not something Berghuis could do much about afterwards. ''We are very happy with the three points. We will include in the analysis what we could have done better.''

And Berghuis will celebrate said victory at home. ''Our oldest child was with my parents all weekend. Then we'll all have a little drink.''

For the fifth time in a row, Ajax came away victorious in the 'Klassieker' on Sunday afternoon. On a visit to the Kuip in which the Ajax players struggled at times, they were extremely disciplined, and eventually won 0-2. The goals were scored by Marcos Senesi (own goal) and Dusan Tadic (penalty kick).

Ajax victorious once again in the Klassieker

In a repeat of last season’s, Ajax have taken all three points at the Kuip. Erik ten Hag's side beat their rivals from Rotterdam 0-2 on Sunday afternoon. Marcos Senesi (own goal) and Dusan Tadic were on the scoresheet. Last May, Ajax were 0-3 winners against Feyenoord in the corresponding fixture.

Klaassen in the run-up to Klassieker: 'I expect a real spectacle'

Davy Klaassen is looking forward to Sunday's Klassieker. The midfielder expects a great match and realizes that Ajax will have to be at their best in order to win.