In-between two Eredivisie fixtures, Ajax were at the de Toekomst training ground Wednesday morning. They beat Fortuna Sittard 3-2 on Saturday. This Sunday, they will play FC Groningen at home at the Johan Cruijff ArenA. We watched them out on the training pitch.

The players were sweating buckets at the de Toekomst training ground. The Ajax squad were training in decent enough weather. And despite the thermometer heading towards twenty degrees, the practice session was not being held during the hottest part of the day. Even so, the players had plenty of opportunity to rehydrate.

As well as the usual position and possession games and rondos, the players were put through their paces by performance coach Youri Pegel. And although the squad had a hard time of it, Steven Berghuis and Jurriën Timber were still happy to get a photo opportunity with Pegel. Or was it really just to show off their muscles? 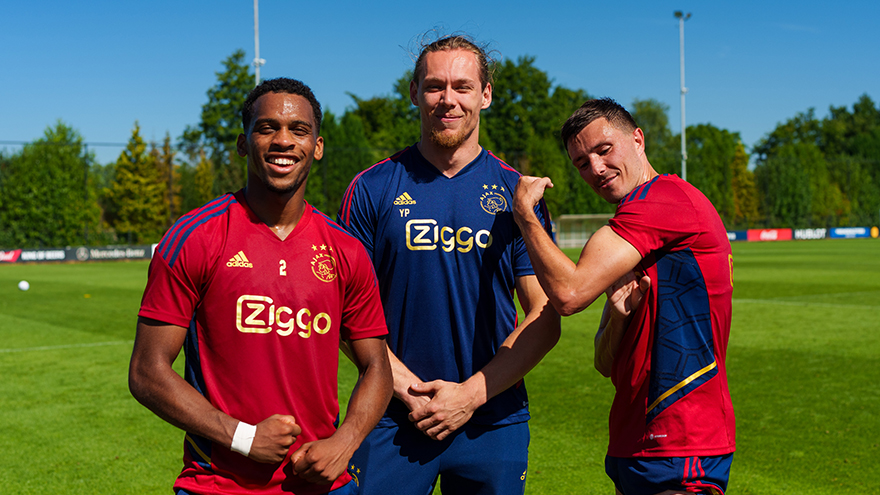 Either way, our photographer remained glued to the sidelines throughout the training session and took loads more fantastic shots.

Ajax and CF Pachuca to work together

Ajax and CF Pachuca join forces. Both parties will cooperate in the field of knowledge and talent development. In the presence of Klaas Jan Huntelaar, the cooperation was signed off this week in the Johan Cruijff ArenA.

Ajax will start the league next weekend with an away game against Fortuna Sittard and will do so in an all-new away shirt from adidas. The national champions will play the 2022/2023 season in a dark blue away shirt, with gold and red accent colours.

Ajax started the 2022/2023 Eredivisie season on Saturday with a victory. Away to Fortuna Sittard, the Ajax team won 3-2 against the Limburg side. After an early opening goal by the home team, the Amsterdam side managed to put things back in order during the second half.