In sealing the 36th league title in club history, Ajax successfully concluded the 2021/2022 season. The championship race remained exciting until the penultimate game in the Eredivisie. How is that reflected in this season’s statistics? Was Ajax dominant statistically in the Netherlands or is the competition getting closer? We figured it out.

In Erik ten Hag’s final year as coach, Ajax won the league with 83. In the two other – completed – seasons in which Ajax won the title under said coach, the point total was higher. In 2020/2021, the team from Amsterdam racked up 88 points. In the first league title under Ten Hag, Ajax managed 86 points.

The 83 points were enough to finish ahead of PSV, though. In addition, ten Hag’s side’s goal difference was far superior. Partly due to excellent goalkeeping by, among others, Remko Pasveer, who had an incredible save percent prior to his injury. 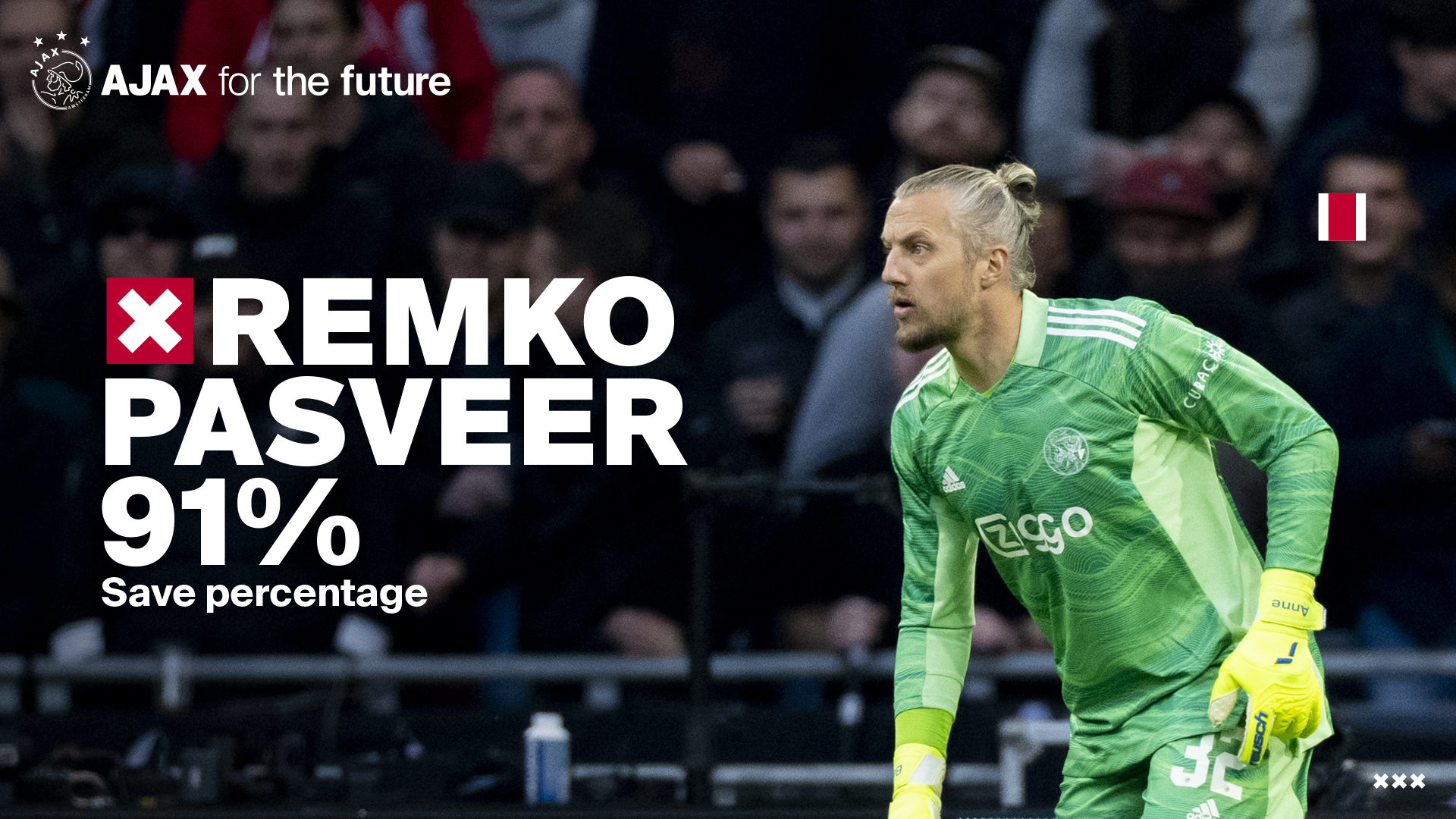 Ajax only conceded 19 goals in the league. In comparison: Feyenoord is second on the list of the best defense with 34 goals against. Ajax also scored in buckets. With 98 goals, they narrowly missed the century mark.

Sébastien Haller was the top scorer in the Eredivisie with 21 goals. Dusan Tadic was the ultimate wingman for him. He provided five assists for the striker. The Serb reached a total of 19 assits in the league in total. In addition to his thirteen goals, the Ajax captain was the most valuable player in the Eredivisie.

With the high number of goals it comes as no surprise that Ajax were also the highest scorers from set pieces. The team from Amsterdam scored 24 times from a dead ball, which was seven times more than number two Feyenoord. In addition, the champion only conceded two goals from set pieces.

Ajax was not the most efficient team in the league in terms of shot conversion. That title belongs to SC Cambuur. Sixteen percent of their shots on net resulted in a goal. Ajax were just behind them with fourteen percent. In total, they scored 98 goals on 663 attempts on goal. That means they had a shot on target every 4 minutes and 36 seconds.

Strong quarter
The goals that Ajax scored this season often came very late in the game. If you divide the match into six blocks of fifteen minutes, you can see how much Ten Hag’s team had left in the tank at the end of the game, especially in the last 15 minutes. That was also the case last year with 21 goals after 75 minutes, but this season the Ajax players went one step further. 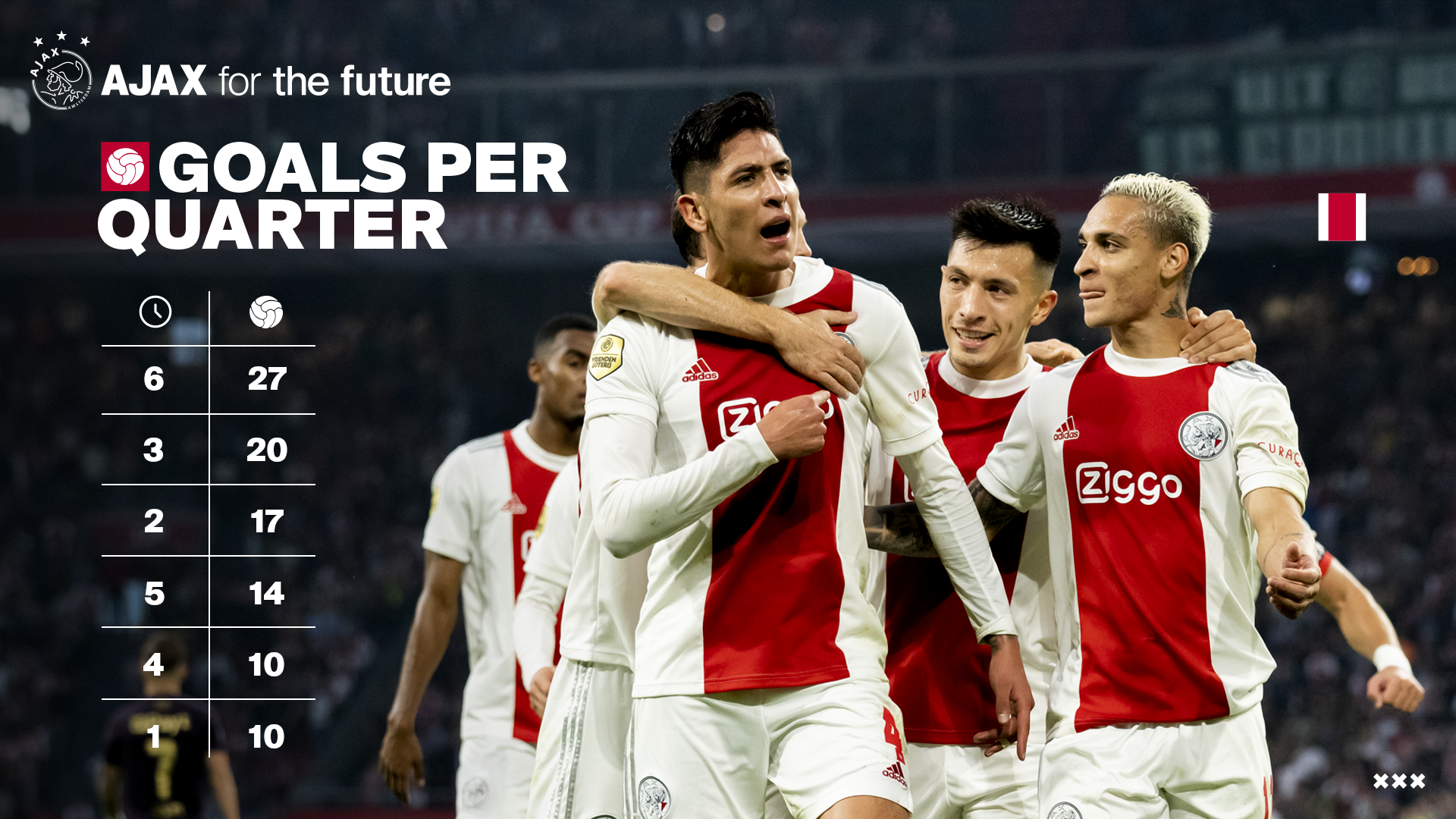 Ajax turned out to be quite dominant on several levels. For example, Ten Hag's team had the majority of ball possession in every match in the Eredivisie. In 27 of the 34 games, their possession even rose above 60 percent. Feyenoord is second on the list having had more ball possession thirty times, with PSV third with 26 matches.

It’s not just about having the ball, though, it’s about what you do with it. Now, it would seem likely that Ajax fired the most shots in the home match against SC Cambuur (9-0). This is by no means the case. In fact, that match is not even in the top 10 for shots in the Eredivisie. The home match against RKC Waalwijk (3-2), on the other hand, is the leader in terms of number of goal attempts. Although Ajax 'only' scored three times that day, they racked up 39 shots. Fourteen of those shots were on goal, but RKC keeper El Maach was their to deny many of them.

Despite the fact that Ajax needed many shots to find the net in the home game against RKC Waalwijk, the Ajax supporters had enough reason to cheer in the Johan Cruijff ArenA this season. Ajax produced no fewer than 62 goals at home, which meant that the Amsterdam crowd was well entertained in many matches. In away games, the Ten Hag team had more trouble finding the goal. In eighteen games, they scored 36 times, an average of two goals per game.

Debutants
Thirty players contributed to these successful stats this season. Compared to previous seasons, this number is relatively high. This is partly due to the goalkeeper problem that arose during the season due to injuries. Maarten Stekelenburg, Remko Pasveer, Andre Onana and Jay Gorter all featured in goal. In addition to Pasveer and Gorter, six other selection players wore the Ajax jersey for the first time in the 2021/2022 Eredivisie season.

Brian Brobbey returned to Amsterdam on loan during the winter break. The twenty-year-old attacker replaced Haller in January, because the Ivorian was active at the African Cup of Nations with his Ivory Coast at that time. Brobbey immediately made his mark on Ajax's game.

This shows once again that several players have played a large part in the success at Ajax this season. The substitutes have also been invaluable this season. Eight substitutes managed to score ten goals and their work contributed to many victories. We can say that winning the 36th national title is a collective achievement that the entire Ajax selection can be proud of.

Every Ajax goal from the 2021/2022 season. From the first goal scored by Sébastien Haller against NEC to the last one on the road against Vitesse from Edson Álvarez.

This is our captain speaking: 'I wanted to kiss it'

Between the palm trees on Curaçao, Dusan Tadic talks about Ajax's season. The captain looks back on the XXX6-championship, the special UEFA Champions League matches and Erik ten Hag's departure.

Farewell interview Ten Hag: 'Ajax has become a part of me'

Together with Erik ten Hag we go through the 4.5 years that he was coach of Ajax. From his debut match as a coach against Feyenoord to the semi-finals of the UEFA Champions League. "We have made Ajax more than 'Europe-proof'."