At the end of January, around the time of the Chinese New Year, the three Ajax coaches 'popped' home for family visits, among other things. Entirely in the dark of course about the unfolding global situation. Whilst in The Netherlands, Covid 19 continued its global spread, making a return to China out of the - provisional - question.  Ultimately, they ended up staying back home for 7 months.

During that time they ran online courses and interacted remotely with coaches they'd worked with for many years in China. It all ran pretty smoothly, but the situation was far from ideal. "You really have to be in situ to ensure all the Ajax principles are safeguarded", explains Kebsch. "We did hold work visits at Ajax in The Netherlands and received regular in-depth updates out of China. But for all that, it's not the same."

Ajax has collaborated with Guangzhou R&F ever since 2017. The Amsterdam-based club wants to convey the Ajax philosophy to staff members and youth players in China. This knowledge transfer is beneficial to both clubs; for Ajax it generates a better position on the Chinese market, whereas Guangzhou R&F profits from the skills-set the Amsterdam coaches have to offer. 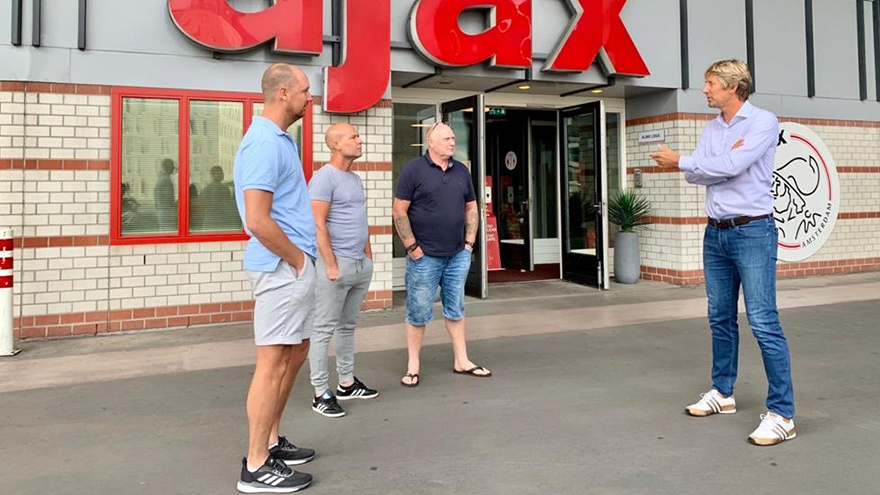 The three gentlemen are delighted to be able to pick up the reins again in the country with a population of 1.4 billion.  Yet the question remains: can things carry on as before?

"Ajax coaches get a certificate, allowing us to travel throughout the country. It's all very well organised. Naturally, adequate measures will have come into play across the board. We like to be pleasantly surprised", tells Kebsch.

'So, we went back to the basics of the game of football, after which we slowly but surely injected the Ajax principles.'

He is 'Head of Talent Recognition & Support' in Guangzhou, having started scouting in China two years ago.  Meanwhile, Kebsch has handed that particular remit over to the Chinese. "In the coming period I'll primarily be focusing on coordinating the partnerships we enjoy with various schools over there."

Football culture
China has no 'amateur football culture' as we do. Talented footballers are scouted from schools rather than football clubs. That big difference in itself entails an entirely different way of scouting for Ajax. "When we first turned up at the schools, the football training sessions seemed more like athletics"; Kebsch compares football in China to how it's done in The Netherlands. "So, we went back to the basics of the game of football, after which we slowly but surely injected the Ajax principles."

Goalkeeping coach Splinter agrees with his colleague's narrative. He coordinates the work of various goalkeeping coaches on the books, and is himself seen on the pitch on a daily basis. Splinter has worked at Ajax's partner club since 1 January 2019. "The inroads we've made in that time are clear to see."

That said, one thing in particular strikes him time and again. "The culture difference. The Chinese follow your word to the letter, but it would be good if they were proactive. That would teach about making 'wrong decisions'. Take today's younger generation in The Netherlands. They have a lot more to say for themselves than their Chinese counterparts. The two are simply poles apart." 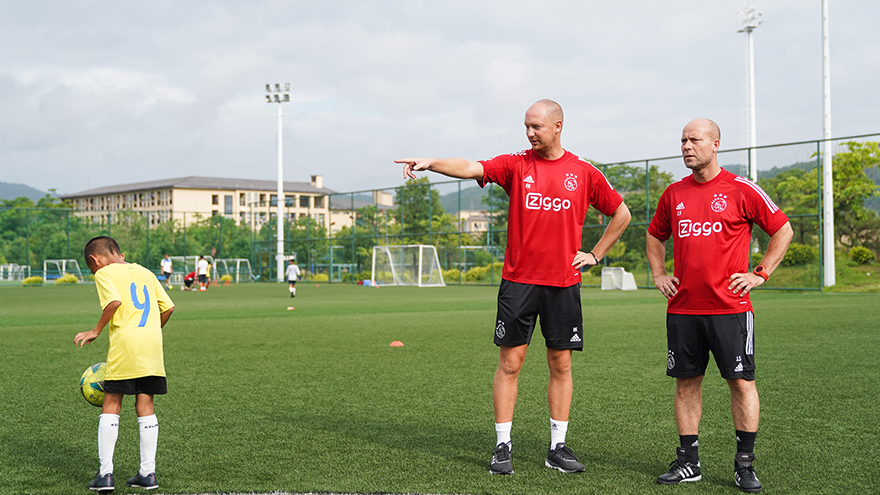 "Kids here aged 8 or 9 are still innocent", adds Kebsch. "That's a different story when they hit 14 or 15. At secondary school it's all about authority. Which you see back on the football pitch. They listen to the coaches, but don't take the initiative. Which is precisely what we do want them to do. How about disputing a coach in China? Unthinkable. Effecting change starts with the coaches themselves. We must place them in a situation in which the players have to proactively respond for themselves."

That said, both gentlemen acknowledge talent exists in this Asian nation. The kids are often nimble and possess excellent responsiveness. They increasingly hope to see the football element back in emerging talents. As such, the first youth players scouted from schools have by now trained with the 1st team. Which seems like a step in the right direction.

'At the end of the day, R&F also wants to see the result of our work.'

A goalkeeper making their breakthrough would signify tangible success for Splinter. "Within professional football in China, a goalkeeper must have a Chinese passport. I like the sound of that rule. Ultimately, they'll only pick the best, and it would be fantastic if the best came from in-house."

Mission
Kebsch's mission doesn't differ all that much. "Young talent is where we'll see our influence the most. We started back in 2017. So, the kids who were in secondary school back then can now move on to the 1st team.  At the end of the day, R&F also wants to see the result of our work."

"We'll be here for at least another 2.5 years. In 2017, we signed up for 5 years. That means over the next 2.5 years we want to see more players progress on to the 1st team. Without a doubt, China has great footballers in its midst, so that's not unfeasible."