This takes the form of golden laurels underneath the Ajax logo, with the number ‘50’ in the middle. Additionally, the inscription ’02.06.1971’ can be found on the inside of the neckline. This is the date on which Ajax, at Wembley Stadium, began their three-year dynasty in Europe, followed later by other European successes, including a Champions League victory in 1995. Ajax will wear the jersey for the first time in their friendly match against Red Bull Salzburg on Saturday, August 22.

Black-and-gold: the ‘Red Thread’
The jersey displays a subtle contrast between dark gray and black, through which the iconic strip can be seen in the middle of the jersey. This design ensures a clear connection to the classic Ajax uniform. In addition to the mainly black layout, there are a variety of golden details: from the sponsor’s logo to the special club logo that is embroidered on the chest. The three adidas stripes on the shoulders, the shorts, and the socks are also gold, as well as the print on the back. 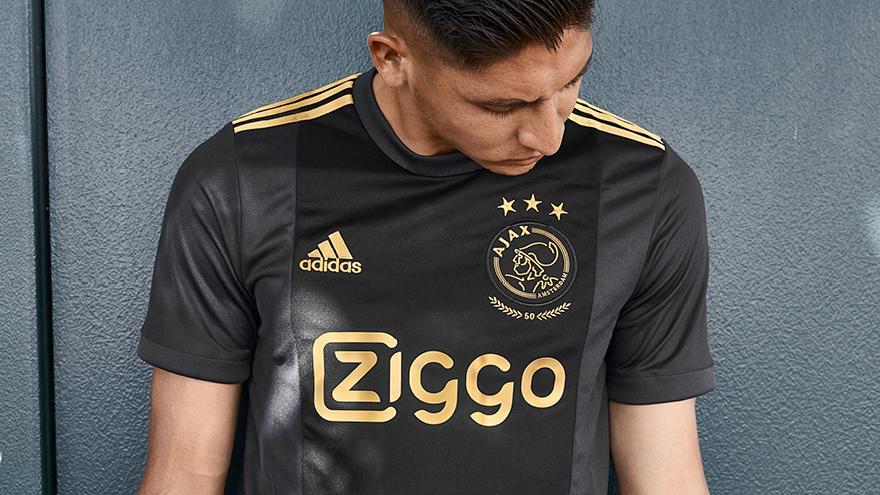 Celebratory anniversary video
In honor of this anniversary season and the new uniform, Ajax launches a video presenting the club’s European successes from the last 50 years. It features heroes of the past such as Heinz Stuy, Sjaak Swart, Edwin van der Sar, Jari Litmanen, Michaël Reiziger, Danny Blind and Sonny Silooy, but also our stars from today like Naci Ünüvar, Daley Blind and Quincy Promes.

Available directly online
This limited-edition collection will be available from August 20, in the Ajax webshop and at adidas.com. The collection is also available in the following Fanshops: Fanshop ArenA, Fanshop Kalverstraat and Fanshop Bataviastad.