Andre Onana enjoyed his return to the pitch with Ajax, along with the three points in Turkey: 1-2. The goalkeeper was quite surprised that he was back in the starting eleven against Besiktas in favor of Remko Pasveer. "He is doing very well. I am happy with my return, but even happier with the win."

"I was quite nervous before the game," the goalie admitted. "But my teammates helped me through it. I'm especially happy that everything went well."

Nervous
Onana was beaten once on a penalty from Rachid Ghezzal in the first half. Although the goalkeeper dove the right way, he had no chance on the striker's effort. He then made a good save on a break-through chance for Cyle Larin. "We came here to keep a clean sheet. But I'm happy with the team's comeback. We played well in the second half."

Thanks to two goals from Sébastien Haller, it finished 1-2 in Turkey. All in all, the goalie from Cameroon was happy with his return to the starting eleven and the three points, "I'm happy with my return, but even happier with the win." 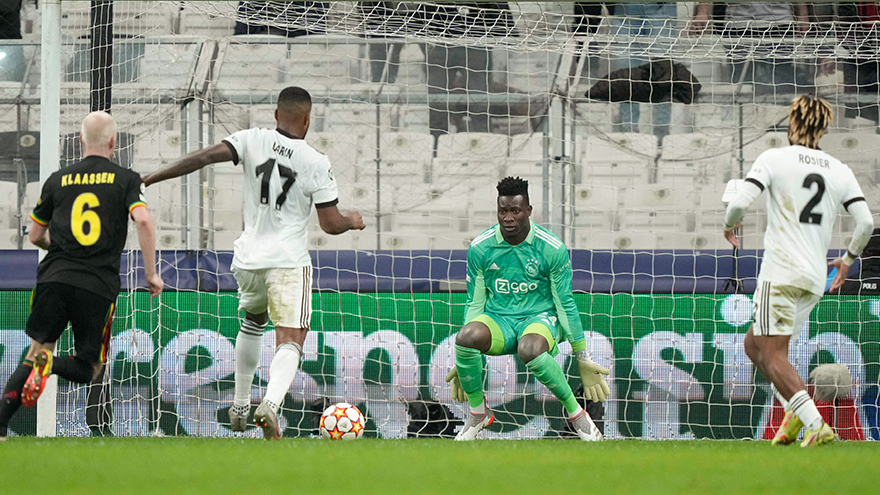 His return felt like a 'second debut': "It had been a long time since I was between the sticks. To play a match on this stage is crazy. I was quite nervous."

Helping the team
Other players noted Onana’s nervousness, "Nous (Mazraoui, ed.) and Zaka (Labyad, ed.) said to me: 'Andre, you're not normally like that'. But I told them it had been a long time since I played and that's why I was nervous. But I'm here to help the team when they need me."

The goalkeeper complimented his fellow goalkeeper, Pasveer, on his performances in the previous four Champions League matches. "I have a good relationship with Remko. He's doing really well and I'm happy about that. I'm not going to compare myself to him when I haven't played for so long. I'm just really happy to be back in the team ."

Ajax win in Istanbul thanks to star man Haller

Sébastien Haller carried Ajax past Besiktas with two goals on Wednesday evening. The attacker was subbed on at half time and single-handedly turned a 1-0 deficit into a 1-2 victory. As a result, Ajax have sealed their position at the top of Group C.

Ten Hag on possible team selection: ‘I have a squad full of starters’

Erik ten Hag indicated at the press conference before Besiktas - Ajax that there may be different players in the starting eleven on Wednesday evening than in the previous four matches in the UEFA Champions League,“But those are not reserves. I have a team full of starters.”

Matchday - That makes us fly