A spontaneous love story
The story of Ajax, Bob Marley and Three Little Birds started in August 2008, when Ajax played a friendly match in Cardiff, against Cardiff City FC. The Ajax fans were asked to remain in the stands after the game. To entertain the patient fans, the stadium DJ played several tracks, one of which was Three Little Birds. The rest is history. The fans instantly embraced the song as their own and have been singing it at every game since. A true symbol of hope, the fans sing the song regardless of the score in the game.

Capsule collection
The kit features a jersey, short and socks. On the socks, Amsterdam’s Andreas crosses are prominently highlighted. The range also includes a track top, track pant, sweater, t-shirt and Samba footwear. Samba footwear originates from football but has become a global fashion icon in its own right. With stripes in red, yellow and green, the footwear also features the Ajax crest on the tongue of the shoe and the three little birds on Amsterdam’s Andreas crosses on the heel tab.

"I am beyond touched that Ajax has taken Three Little Birds and made it their anthem. Stories like this warm my heart and show how impactful songs like Three Little Birds can be. Soccer was everything to my father. To use his words: football is freedom”, says daughter Cedella Marley. 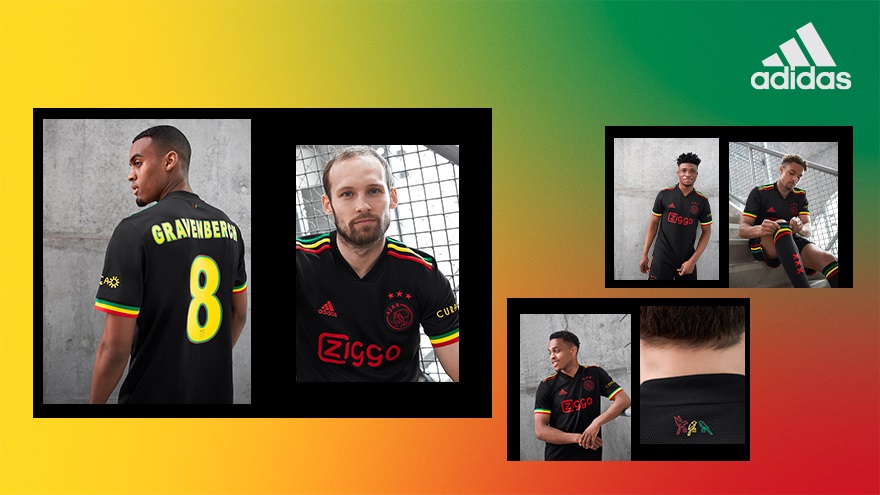 Available now
All product is available from August 20 onwards, and available on ajax.nl/shop, adidas.com and in Official Ajax Fanshops (ArenA, Kalverstraat and Bataviastad).

Ajax and adidas present new Home jersey 2021/2022: old logo back on the shirt

In a Johan Cruyff Arena with no fans for almost the entire season, the ‘old logo’ was one of the few spectators at the Ajax home games. The impressive banner, handmade by the fans, could be found behind the goal week by week – in the stands that usually are the epicenter of a roaring Johan Cruyff ArenA. After such an unreal season, this historical logo will be back on the home jersey, in what is a one-off tribute to the fans. This logo does not contain the championship stars, like that was also not the case back in the days. The three stars do show as a neck detail, with a subtle addition of the three Andreas crosses.

Ajax go 'back to red' for their training strip

Many fans will have fond memories of board members Edwin van der Sar and Marc Overmars always 'in the red' as players on the training pitch, or of the red training strip future captains such as Jan Vertonghen and Luis Suárez wore when they came out for training. Although the training strip has often changed colour in recent seasons, Erik ten Hag's team will be going back to the traditional Ajax red for the 2021/2022 season.

Coca-Cola European Partners and AFC Ajax signed a partnership agreement today that will make Coca-Cola an Official Partner of Ajax for the coming three seasons. This partnership is all about bringing fans together and offering them unique experiences. Coca-Cola will present several brands from its broad product portfolio of drinks with great activations for Coca-Cola Zero Sugar, the natural mineral water Chaudfontaine, Aquarius and Fuze Tea.