After winning the cup and the league title, Ajax has another gift to offer the fans. In the game against Feyenoord this sunday - their first match as league champions - Ajax will play in the all new adidas Away kit for 2021/2022. The predominantly striped kit consists of two shades of blue, with mint green accents.

Vertical stripes
Ajax has a rich history when it comes to striped shirts. In the first decade of its existence, Ajax played in a striped home jersey. Ever since the 80’s, Ajax has had a striped away kit every decade. In the new Away kit, the three stripes from adidas have the same mint green color as the pinstripes on the front of the shirt.

The three Andreas crosses from Amsterdam, plus the Ajax adidas and Ziggo logos are mint green too, while the dark blue borders around the stars and logos of adidas and Ziggo also stand out. The names and numbers on the back have the same mint green colorway and come in a new font with distinctive lines. The primary shorts are in the same dark blue as can be found in the shirt. 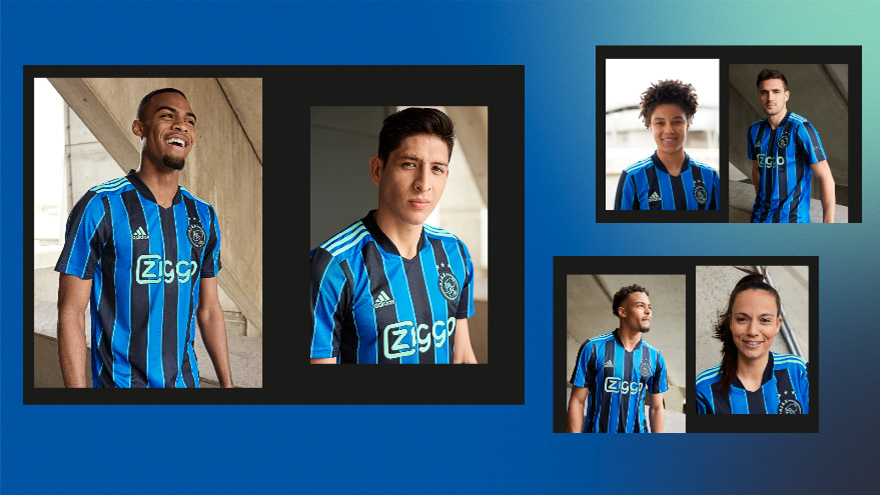 Against Feyenoord, the team will play in an alternative short, in a lighter shade of blue. The last game of the season, against Vitesse, will also be played in the new kit.

In pictures | The champions prepare for the Klassieker

Ajax were crowned champions for the 35th time last week, but that does not mean that the season is over. In fact, one of the biggest matches of the year will be played on Sunday, when Ajax takes on Feyenoord in Rotterdam. On Saturday afternoon, the team prepared for the Klassieker - you can see the images here!

Season analysis in Ajax Podcast: 'At that moment I knew they were going to be champions'

Ajax had an excellent season in the Eredivisie and Dutch Cup. Last Sunday they put the icing on the cake, by capturing the 35th championship. But what exactly was the deciding factor this season? Which moments and developments were crucial? In this special episode of the Ajax Podcast, we look back at various key moments.

XXXV - This one is for you

Dear Ajacieden. The 35th Eredivisie has inspired us all. This one is for you.